Over the years I have mentioned all the obstacles I had to overcome on my path to becoming a full time transgender woman.  Many don't realize just because they were born a certain gender, the path towards becoming a woman or a man often is not assured. For transgender woman and men the path is infinitely more difficult because we have to tear down one life and start all over.

I have mentioned the losses of male privilege, gender communication as well as appearance in my transition. One thing I have left out was socialization. For me, becoming socialized or as I call it, being allowed to play in the girls sandbox was key to being able to live a feminine life. Overall it was a gradual process.

What really aided me in the process was when I was invited along on several girl's night outs. The first was relatively easy as it was a Halloween party. I also had the benefit of having one of the other attendees go along who was every bit as big as I was. So, even with my attempt at a sexy outfit and big hair, she was right there competing with me. I am happy to say it was a friendly competition and was even more fun when we went to a straight tavern  for the party. It turned out the place was owned by Liz's (my partner) boss. I didn't know what to expect but had very little anxiety since after all  it was Halloween. Ironically I was asked by one woman if my big hair was my own. On the other hand, the evening still didn't provide the real feeling of a girl's night out.

My second and third tries at feminine socialization did.

The second time I was invited along to a girl's only birthday party at a local restaurant. I did experience some anxiety before going. Of course I had to figure out what I was going to wear so I blended in with the other women which didn't turn out to be much of a problem. More importantly I had to figure out what I was going to say along the way. I was afraid just to sit there and not try to communicate at all would portray me as some sort of a bitch. The last thing I wanted to do. It turned out I didn't have much to fear as the conversation flowed smoothly enough  and I added in when I could. Only one of the other woman seemed to hold it against me that I was transgender. I figured one out of six wasn't bad. I ended up having a good time and made sure I expressed my appreciation to the person who invited me. 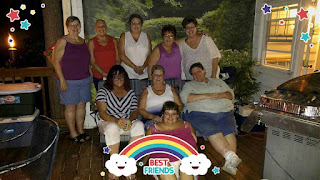 It turned out my first invitation out with the girls shortly led to another in the form of cookout. I have added a picture to your left of the evening. I am in the bottom row, left hand side.

Not shown were the two or three men who showed up who had very little to do with me. Fortunately, several of the other women did and I had a good time. The lesson I learned was there was no huge mystique women go through when there are very few men are around. They do have a tendency however to talk more about family than men do. No surprises.

Along the way, I did miss out on going to a bachelorette party I was "sort of" invited to, then not. Truthfully I don't know if it happened or not since the marriage only lasted one week. Which is another experience for another time.

The last meaningful girls night out I was invited to came several years later. I had became a regular at a couple large venues which served food and adult beverages. One of them was having a small get together with a few servers and bartenders at another nearby venue. Surprisingly I was invited along. This led me to quite a bit of anxiety since I needed to step up my feminine game. The other women were all younger and more attractive than I could ever hope to be. I went along I tried my best. I wore my long black skirt with the deep slit, black tank top and long dark wig. As it turned out, nothing seemed to matter. We naturally walked in together and no one seemed to notice me at all and I was especially not noticed by any of the guys who were trying to come on to the much younger and prettier group I was with.

Over all I am just thankful for the women who invited me along to play in the sandbox. It did so much for my feminine socialization.