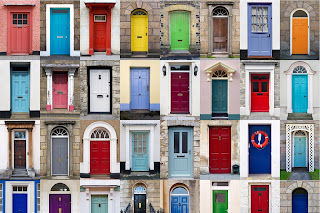 Or, in the gender out door.  It seems all my life I have been trying to force my way in the out door when my gender has been involved.

Of course, similar to many of you, my earliest explorations into a feminine life involved diving into my Mom's clothing and makeup. The more I did, the more I felt the gender door I was trying to go through was closed to me. Still I persisted against all odds. The harder I pushed against the out door finally it seemed I could see just a little of what was beyond the door.  I guess you could say there was life outside of my gender closet.

The more I pushed, the harder the out door was to open. Looking back, I believe now the problem was I was still taking the whole process of transitioning into a feminine world too lightly. Even though I considered myself a student of watching the cis women in my life, my view was still clouded. I was so envious of their lives I couldn't see the forest for the trees, so to speak. The prime example is how I was so self centered on the appearance factor of being feminine, I missed the true layers of being a woman.

I then came to a point of no return. I was cross dressing as a man close to the amount of time I was spending as my authentic self. Most importantly I realized I was not challenging the out door enough and resolved to push through it and see if I could live my gender dream. I still remember the first night I resolved myself to seeing if I could blend in and present well in a venue I had frequented many times as my male self.

To say I was terrified is an understatement. Literally, time stood still as I approached the door of the upscale restaurant/bar I chose for my personal coming out party. I am fond of writing an oxygen tank would have been my best accessory for the evening. Through it all, I was accepted and was able to find a seat at the crowded bar with several other women who were just getting off of work from their jobs at a nearby mall. Once I started to breathe normally I began to feel so normal. Once I had pushed the gender out door this far I felt I would never be able to return.

I never did return. From that point on I set out to build a feminine life I thought  would never be possible. I made new friends who accepted me as my authentic self. My closest transgender friend even said I "passed" out of sheer will power. Which is the subject of another blog post.

To make a long story short, I was able to shatter my gender out door and eventually start hormone replacement therapy.

It was a long and difficult struggle. It took me over a half a century to get through the gender door but I made it.