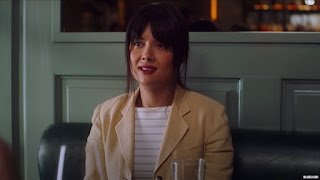 " In the new comedic film Together Together, Harrison portrays Anna, a character attempting to become the surrogate mother for a single man, Matt (Ed Helms). It's the kind of role that she, as a transgender actress, would love to be cast in more often. And she hopes her hilarious, heartfelt performance sends a message to Hollywood."

"Harrison has appeared in a variety of productions, from A Simple Favor to Shrill to voice acting in Big Mouth and Disney's Raya and the Last Dragon. However, Harrison is dismayed by the scripts that usually cross her desk, which tend to be some variation of a "down-on-her-luck trans sex worker" who overcomes the trauma of family rejection to become a "brave 'yas queen' girl boss."

"When people only see you as [your marginalized identity], you're not getting the same opportunities" as other actors, Harrison noted."