On Saturday Night Live last week, as I was nearly dozing off during the latter parts of the show, I was surprised to see a figure obviously in a full  dress on stage before the show cut away to a commercial break.

I was surprised to see the show's musical guest "Kid Cudi" in the dress and ready to perform as the break was over.  Reaction was swift, This is from the "Guardian" : 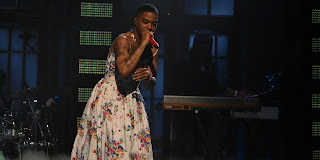 "The dress marked the anniversary of Kurt Cobain’s death, with Cudi saying that it was a tribute to the Nirvana frontman who had worn a similar dress on the cover of the Face magazine in 1993. While social media users praised the way Kid Cudi channeled Cobain’s gender non-conforming approach to fashion, they also pointed out a double standard.

On Instagram, model and activist Munroe Bergdorf wrote: “as fab as it is to see cis gender straight men embracing femininity through fashion … let’s remember that they also won’t face nearly as much hatred or the physical danger that visibly queer folk will when they do the exact same thing.”

In the comments, one user wrote "it feels insulting that cis hetro men get praised for what trans people get bullied and killed for. For them it’s a trend, a costume … for trans people it’s life and death.” Some 13 transgender people have been murdered in 2021 so far according to the Human Rights Campaign, which is a 333% increase from 2020 when three transgender people were killed."