I Laughed Until I Almost...

A couple nights ago we ushered in the Holiday season formally around here by watching one of our favorite Christmas movie classics, National Lampoon's Christmas Vacation. It stars "Chevy Chase." It was released in 1989 and everytime I watch it I laugh until I almost wet myself. Which I guess is one of the hallmarks of being an older feminine person anyway. It is so popular it is still showing in a few of the local theatres around here which are still open.

As the holidays are here, I also had a powerful reminder of the season last night. When I went out the front door to do the decidedly unglamorous task of taking our recyclables out to the bin last night, immediately I was surprised by big fluffy snowflakes and a small coating of snow on the cars. The snow along with the amount of colorful Christmas lights on the street combined for a wonderful holiday scene in my mind.

Once I returned to the warmth of the house, I began to think of the feelings I had during Christmas as I grew up and beyond. As I have written before here in Cyrsti's Condo, much of my early childhood memories of holiday gifts was similar to "Ralphie" in the movie A Christmas Story. 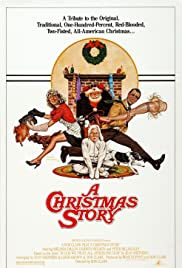 In the movie, one of the central themes is how badly the oldest son "Ralphie" wanted a BB Gun. In my case, I wanted a doll and got a BB Gun instead. The gift was a direct reinforcement of my gender dysphoria as I was growing up.

Of course too, there were the trips to my relatives for Christmas. I had two girl cousins who were roughly the same age as I was. They were always dressed in their holiday best dresses with white tights and black patent leather shoes. I remember how I desperately wanted to be them. But of course I was stuck in my usual boring boy clothes and a flat top hair cut.

Little did I know how times would change for me.

As I reached a point to be able to live full time as a transgender woman, I began to realize how my feminine Mtf gender transition had as much to do with Christmas as it did with Halloween. As I grew out of the idea of receiving dolls as gifts, I grew into receiving nice women's sweaters and skirts. More importantly, I was able to get out of the house and explore the world.

Between now and Christmas, I will be writing about them here in Cyrsti's Condo.