At my age, transgender pioneers mean a lot. After all, they had the courage to come out and live an authentic life during a period of time when it was exceedingly rare to do so.

Jan Morris (below) was one of those people.

Here is what "Wikipedia" wrote about her:

"Jan Morris CBE FRSL (born James Humphry Morris, 2 October 1926 – 20 November 2020) was a Welsh historian, author and travel writer. She was known particularly for the Pax Britannica trilogy (1968–1978), a history of the British Empire, and for portraits of cities, including Oxford, Venice, Trieste, Hong Kong, and New York City. She published under her birth name, James, until 1972, when she had gender reassignment surgery after transitioning from male to female.

As James Morris, she was a member of the 1953 British Mount Everest expedition, which made the first ascent of the mountain.[3] She was the only journalist to accompany the expedition, climbing with the team to a camp at 22,000 feet on the mountain and famously having the successful ascent announced in The Times on 2 June 1953, the day of Queen Elizabeth II's coronation." 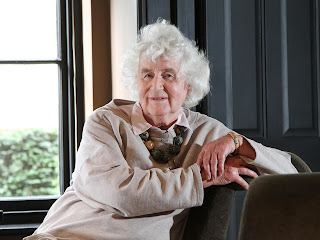