Trans activist Shakina Nayfact is making history again as she lands a starring role in the new NBC comedy The show which is called "Connecting" will be on Thursday nights. Nayfact (below) is making history as the first transgender regular on a prime time television show. Here is a brief description from the "Advocate" : 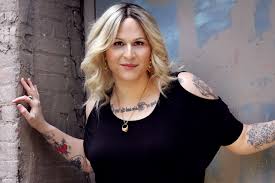 "On the topic of her history-making role, Nayfack placed it in the larger context of the transgender movement. "It feels like a huge honor and a huge responsibility to get right," she said. "And also, I think it is a benchmark in a process of social change that so many other trans artists have forged alongside me and ahead of me. I like to stay away from the narratives of like, you know, 'first achievement' and think more about the legacy that we are building together as a community of trans actors fighting for representation for the rest of us out in the world."

However, in a time when few Hollywood productions are being made due to the pandemic, and in an election season to boot, Nayfack acknowledged how special it was to have a trans character represented.

"I look at Connecting as one of the first shows to be made amid the crisis of COVID-19. And one of the seven series regulars on that show is a trans woman," she said. "So that's really exciting to me because we're already guaranteed admission. We're here. We're inside the theme park. So let's go on some rides."

Perhaps some day we will come to the point where we don't have to point out an actor or actress is transgender at all!