I was sure I didn't have any pictures "just laying around" the house. Finally, I remembered a few of the former guys who served where I did on the American Forces Radio and Television Service - Thailand Network actually put together a website years ago. I began to wonder if I was in any of their pictures.

I went out on a limb and googled my deadname and AFTN and amazingly, there I was. Listed in a group picture of the entire crew of the military Udorn, Thailand radio/television station in September of 1972. I would have been approximately six months removed from basic training and the station itself was still fairly new. A year before, a battle damaged fighter jet had crashed into the old station killing all nine of the workers inside. So the surprise picture brought back many memories, many not so good.

At any rate, I have decided to share the photo on Cyrsti's Condo. I am on the bottom row, first person on the left. I worked all nights then and lived off base, so somehow I escaped not having to wear a uniform for the group. Ironically the only other military person shown here not in uniform was my close friend Dave Mallett.

With this group we operated and tried to maintain a 24/7 radio station and a 14 hour a day television station for the airbase and separate "secret" sites in Cambodia. Our job was to provide as well as we could a connection to home for the others we served.

I am humbled and honored to receive the award! 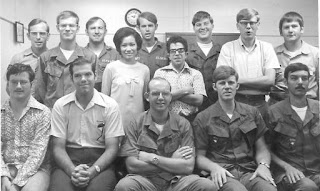