The passing of "Ruth Bader Ginsburg" creates a massive hole in the US Supreme Court. One I fear will be impossible to fill with a qualified candidate. Here was one of the news releases: "Justice Ruth Bader Ginsburg, the demure firebrand who in her 80s became a legal, cultural and feminist icon, died Friday. The Supreme Court announced her death, saying the cause was complications from metastatic cancer of the pancreas." 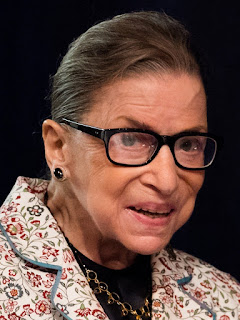 Seemingly, before the body even had a chance to cool off, "Moscow Mitch" McConnell in the Senate was starting the fight to replace Justice Ginsburg who had also voted to help gender causes.

For all of you who didn't vote for Hillary and identify as transgender and/or crossdresser, your desire to have all of your gender rights taken away could become a reality.

In the meantime, Rest in Power Justice Ginsburg. You will be missed.