For those of you who may not know, "Some Like it Hot" is a 1959 classic film directed by Billy Wilder. The plot revolves two band members from gangster era Chicago who inadvertently witnessed a mob killing. The plot thickens when they had to flee Chicago for Florida as members of an all girl band.

The movie stars Tony Curtis and Jack Lemon in drag along side a very sexy and glamorous Marilyn Monroe as the band's singer. The movie moves quickly with many of the usual problematic happenings you would expect from two guys thrust into playing women to save their lives. Of course along the way, you are left to your own imagination on how the two obtained their feminine attire as well as other key activities.

I clearly remember I was ten when this movie finally made it's way to television. As the family watched it, I had to act like I was disinterested when exactly the opposite was true.

Over the years, "Some Like it Hot" has obtained "classic" movie status and is definitively worth a view if you haven't seen it. Especially the last scene which I won't disclose. The Turner Classic Movie channel shows it every now and then, or maybe you can order it on demand someplace. But one way or another, it is wonderful fast moving comedy!

Marilyn is fabulous, seen below with Tony Curtis and Jack Lemon. 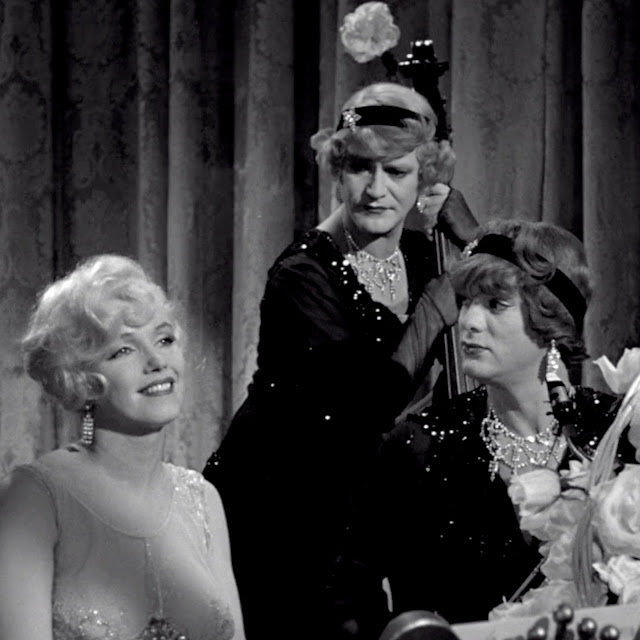 Email ThisBlogThis!Share to TwitterShare to FacebookShare to Pinterest
Labels: drag