Perhaps you have read somewhere by now, the Navy has given a waiver to serve for a stellar transgender active duty person. As you probably remember, for no good reason (except pleasing his red neck base) the liar in chief banned all transgender troops from serving. Since I am a transgender veteran myself, this story really hits home.
Now. “The acting Secretary of the Navy has approved a specific request for exemption related to military service by transgender persons and persons with gender dysphoria,” Navy spokeswoman Lt. Brittany Stephens told CNN.
Here is more from the LGBTQ Nation: “This service member requested a waiver to serve in their preferred gender, to include obtaining a gender marker change in (the Defense Enrollment Eligibility Reporting System) and being allowed to adhere to standards associated with their preferred gender, such as uniforms and grooming.”

The unnamed officer came out after the ban went into effect in June 2019. They were represented by the National Center for Lesbian Rights(NCLR)  and GLBTQ Legal Advocates & Defenders (GLAD).

“The ban has been in place for over a year and this is the first waiver to be granted,” said Jennifer Levi, GLAD Transgender Rights Project Director. “While we are relieved that our client, a highly qualified Naval officer, will be able to continue her service, there are other equally qualified transgender service members who have sought waivers and are still in limbo, despite being perfectly fit to serve. Dedicated military service members shouldn’t have to bring a lawsuit to be able to continue doing their job.”

Hopefully, in November, the people will speak and the crook in chief be be voted out! 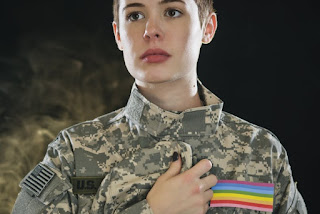