What you See Is What you Get

Monday night I did participate in the on line cross dresser-transgender support group meeting. I was surprised it was less well attended than I expected. I wasn't so surprised in the number of new participants who were just coming out of their closets (at least with others) to explore their femininity. Remarkably to me, there was another person who checked in who was ten years older than even me. She is 80! I was interested to see also, what sort of effort the attendees put into their appearance. For the most part, those few who did "dress-up" mentioned it was to relieve the boredom of dressing in their old boring guy self as they are stuck at home. At that point I added I am a what you see is what you get person. In other words, I don't have any male clothes to be seen in. Even if I wanted to. 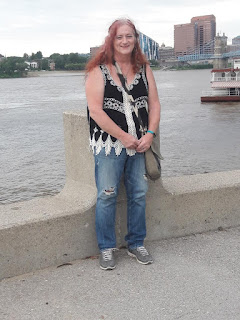 On the other hand, I did (like I always do) put on a light application of makeup and brushed out my hair. I am fortunate in that my former hair dresser and I decided to let my hair revert back to it's natural shade. So I don't have to worry about going back to the old days of trying to color it at home. I went through more than a few adventures attempting to make my hair a different color and presentable. I found out the hard way how easy it was to color everything else other than my hair.
So, with a touch of makeup and a quick brushing of my hair, I was ready to go and I hoped the camera on my lap-top would help me too. It turned out not to matter much anyhow. Predictably, the new people spoke at length about their coming out (as they should). All I really added was how my endocrinologist had approved another six months of my recently increased estradiol prescription.
All in all, I found the meeting to be interesting but no substitute for the real thing.
By the way, the picture is from last years' Cincinnati, Ohio pride. My hair is rapidly getting close to that length again.
at April 16, 2020