"Nicole Maines once offered lessons in becoming herself. Now, she becomes someone else for a living.

The Maine native first made headlines as an anonymous student who sued her school district in 2013 over bathroom discrimination. School officials had barred Maines, who is transgender, from using the women’s bathrooms. She won her case, and eventually went public to describe the experience in the family memoir Becoming Nicole: The Transformation of an American Family. 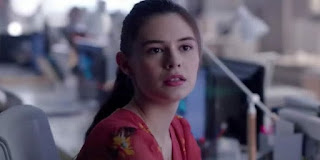 Maines’ activism also led to on-camera appearances in television and film discussing her experience as a transgender American. Her natural charisma also led to acting opportunities, including appearing as the first transgender superhero on American television with her role as Dreamer/Nia Nal on The CW series Supergirl, produced by Greg Berlanti. Last year, she also earned acclaim (and a Queerty Nomination) for her work as a vampire in the indie horror film Bit.

With her star on the rise, Queerty snagged some time to chat with Maines about the unusual trajectory of her life, her newfound acting career, and her survival lessons for the COVID-19 lockdown. Supergirl airs Sundays on The CW."

To read the interview, go here.