My Husband is Such a Girl

The inspiration for this post comes from a new participant in my cross dresser- transgender support group. She recently posted for the first time of her experiences of going out with a very understanding wife. I am including the picture she shared on Facebook. I thought she looked very feminine and real.
Then I began to wonder what her wife thought when she saw the transformation. Or what any woman thinks.
When I have ever began to discuss this topic I always seem to get bogged down into my own version of being biased one way of another. The problem being, I know this whole transgender thing is NOT a choice or a fad. Normally, once you have had a chance to glimpse your true self, there is no going back. The process  leaves many relationships in the dust. Wrecked and broken. Also relationships will go through transitions too.
Take the far from average accepting wife/spouse for example. Just how accepting will she continue to be as her husband/spouse begins more and more to accept and embrace her new wonderful self. What if she wants to begin a hormone replacement therapy regimen which will in most cases end a traditional sex life. The "what if's" go on and on to wanting to dress and become her feminine self full time.
As much as people want to talk and write about loving the person on the inside not the out is the important piece of any relationship, changing your gender can strain a marriage to the core. After all, changes such as gender are not what the average woman signs up for when she marries the man of her dreams. Plus dressing him up and helping with his makeup is all kicks and giggles until the finished product looks very presentable and she can she the true self too.
Again, there is s HUGE jump from a cross dressing husband wanting all of a sudden to take his new found femininity into the world to a full time HRT charged transgender woman. A jump many wives don't want to make and I don't blame them. I do blame them them though when they use the situation as a club to bang away at a trans woman's extended family. Betrayal is a powerful emotion but also is the drive to discover and live as your true self.
I just hope "Jayde" the person in the picture and her wife can make the transition as smooth as possible. She has daughters too which are also involved which is an idea for another post altogether.
Finally, it is no secret cis women are multi layered humans. Much more than men. Sometimes it takes more than patience to see if they will ever accept a trans woman as a spouse. Sadly in many cases it is a no win situation...for both sides. 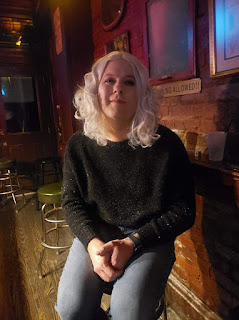