I have been binging on the cable television show "Dispatches from Elsewhere" for quite some time now as many of you Cyrsti's Condo regulars know. It stars a real live transgender woman playing a very understated trans character. Meaning, the show itself never makes any sort of a big deal at all over her past. She is merely there playing a very real character. The actress playing the role is Eve Lindley. 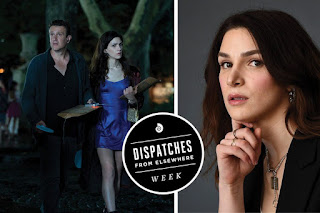 I don't normally write a post upon nearly the same subject and/or give up a spoiler alert here in the blog but this time I can't help it.
On this weeks' show, the simmering sexuality between "Simone" (Lindley) and "Peter" (Jason Segal) finally boils over into a passionate long series of kisses. It's the first time I can remember a cis man has kissed a transgender woman so completely on national television. Even though it wasn't on one of the so-called major networks.
Liz and I watch the show on Monday nights at 10:00PM on the AMC Network. We are on the Spectrum cable system. I heard from one reader she couldn't get it on her television provider but did on a Firestick. Or you could possibly try to stream it on the link to AMC provided above.
Finally, one last spoiler alert. Be prepared, it is a truly strange show!
Email Post
Labels: entertainment feminine lifestyle Young transgender woman