From Russia With Love

Tatler has become Russia’s first magazine to feature a transgender woman on its cover, the society magazine announced as its April issue hit newsstands Wednesday. 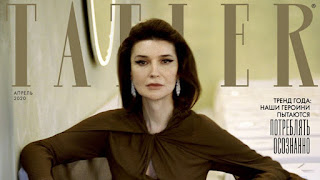 The Kazakh-born, Paris- and Moscow-based socialite Natalia Maximova came out to her Instagram followers in December. In the interview with Tatler’s chief editor, Maximova said she “never had the need to come out” until she witnessed and intervened in a confrontational scene in Belgium.
“I understood then that I have no right not to defend others. I have no right to stay silent,” she said.
Tatler, a Condé Nast publication in Russian circulation since 2008, said it hoped Maximova’s interview “will give hope to those who need it.”
“I want to dedicate [the cover] to those who fight, to those who love and to those who made their choices or [are] on their way to [making] a decision,” Maximova wrote.
At least half a dozen major magazines around the world have featured transgender models on their covers.
For more, go here.
at March 14, 2020