For once, thanks to Laverne Cox and Indya Moore, transgender women received quite a bit of positive  publicity at this years Emmy awards. 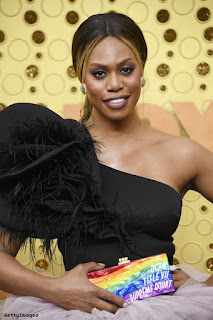 Check out Laverne's clutch she carried on the purple carpet!


Cox was nominated for the Outstanding Guest Actress in a Drama Series category for the final season of Orange is the New Black. After receiving three nominations for her performance on the Netflix series, Cox has said she is more than ready to become the first transgender actress to take home an Emmy. But on the purple carpet she decided to say something else.
Cox wore a tiered Monsoori gown, complete with a shoulder ruffle, as well as a full, lilac skirt. But what was more powerful was what she brought with her: an acrylic clutch as well as her guest, lawyer and activist Chase Strangio.

Transgender actress Indya Moore also sizzled on the runway.
Moore stars as Angel on FX’s Pose, which boasts television’s largest cast of trans actors in series regular roles and the largest LGBTQ+ cast for such scripted shows. The series was a contender for six awards , including Outstanding Drama Series, in addition to Outstanding Lead Actor in a Drama Series for Billy Porter. 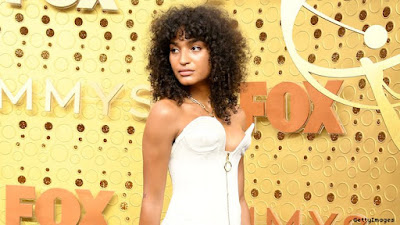