Perhaps by now you have heard the Log Cabin repugs have come out (no pun intended) and voiced their support of resident rump. What upsets me is the stories I see which call the Cabiners a LGBT group.  Sure, and I don't know this for sure, there may be privileged gay cis men in the group who don't care about any LGBT rights other that they already have. But are they a majority?

What I don't understand though, is why they would support an administration which is so actively trying to trying to take our rights away. How are they going to react when their legal same sex marriages come under attack.

Perhaps too, maybe you have noticed I haven't even mentioned the continued attacks on transgender rights. I guess we have no rights either with the Log Cabin Republicans. 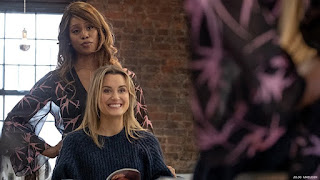 On a brighter side, Laverne Cox maybe the first transgender actor to win an Emmy! From Out:


"In 2014, Laverne Cox became the first transgender person to be nominated for a primetime acting Emmy for her work on Orange Is the New Black. Cox was not only the face of the transgender tipping point, she helped humanize trans folks through her dynamic performance as Sophia Burset.

In the final season of Orange, which premiered this summer, Sophia was largely absent — something Cox said was mostly due to a scheduling issue — but did make a final, triumphant appearance as the new owner of her own salon (thanks to a prison settlement). While many of Orange Is the New Black’s characters had tragic endings, something the creators felt was necessary to illustrate the many ways the correctional system ruins lives rather than rehabilitating them, Sophia was one of the few who was gifted with a happy ending, something all too rare for trans women of color in the real world."
For more, go here.