Talented, gorgeous Andreja Pejic is still breaking down barriers. The Australian born model is now taking on the silver screen. More from the "Them" site:

"Andreja Pejić has walked runways for the likes of Jean Paul Gaultier, Marc Jacobs, and Jeremy Scott. She’s been a cover girl for international editions of GQ, Elle, Marie Claire, Harper’s Bazaar — the list goes on. But tomorrow, the 27-year-old model will make her acting debut on the big screen. 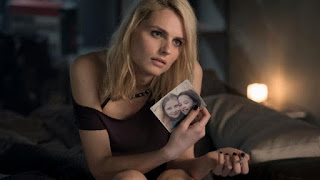 “It’s been a crazy whirlwind. I can’t believe I’m in a blockbuster Hollywood film,” Pejić tells me with an elated sigh. “What is life!” It’s two days after the New York premiere of The Girl in the Spider’s Web when we hop on the phone, and Pejić is still processing the fact that she stars in an adaptation of the book series she grew up reading as a teen.

Can't wait to see it! To my knowledge, it is streaming on certain services such as Amazon Prime. It was actually released November of last year.
at June 09, 2019