Connie kindly read the lengthy article I spotlighted here in Cyrsti's Condo about the ridiculous transgender military ban. You can see the post here. Here is her (Connie's) take:

"Let me first make it clear that I think this ban is ridiculous, and unconstitutional, as well. Bravo for these women's efforts!The part of the story that really intrigues me is this part: 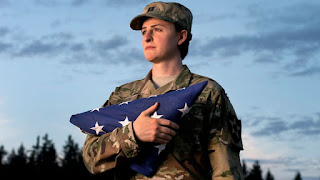 "She’s worried about people who are only just realizing they’re transgender. Hendrick came out at 46 years old and hadn’t known of a trans person other than on television before 2014. She said one of her clients realized they were trans after seeing congressional testimony from a trans military member.“When I realized what was going on with me, I was like ‘I have to transition now, even if it ruins my career. I’ve been alive for 46 years and I have not experienced life as who I truly am. I need to do this,’” Hendrick said.I realize that my gender identity and dysphoria are mine, and mine alone. I can't expect that every other trans person has had the same experiences. However, it's difficult for me to believe that one goes through life, especially into middle-age, unaware of their own dysphoria - let alone never seeing some sort of similarity between themselves and trans people they have seen on TV. I also understand denial, but you can't deny something unless you've first recognized it.I can only take her (Hendrick's) statement as her own truth. When I was 46, I was hiding in the closet, having lived with my dysphoria since early childhood. While she made a complete transition (physically, anyway) in just two years, I was still hiding myself in the closet at 48. In fact, it was another ten years before I could decide that I had to live the rest of my life as a woman. I certainly don't advocate following my path to transition, but, even had I not been the procrastinator that I am, I don't think I could have made such a drastic change in only two years' time. Although I don't believe in all the "rapid onset" nonsense, this case seems just about as rapid as it could be.As I said, intriguing."