Per norm, I am a little late, but yesterday was "National Coming Out Day" for LGBT women and men.

Also "per norm" my coming out was basically backwards. The first time I told anyone I was a "transvestite" came when I was in the Army in Germany. I had a very close knit group of three friends, one of which included my future first wife. 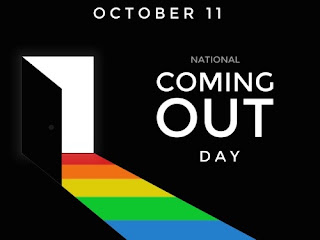 Seeing as how this was way before "Don't ask, don't tell" time in the military, I'm lucky I didn't get reported to the higher-ups. Maybe it did, but I only had less than six months to go before discharge and hassling me may have led to more problems than worth. Of course too, this was way before the transgender term had been invented.

At any rate, later on in life, one of the guys I came out to ended up coming on to me, the other remained a friend for years and as I said the woman involved ended up marrying me.

Ironically, outside of an ill fated attempt to come out to my Mom when I was discharged, coming out to anyone else didn't happen until I came out for good.
at October 12, 2018