The bad of course is hurricane Florence which is threatening a good portion of the East coast of the United States. For those of you in the path, please take cover and stay safe! Or of course, evacuate altogether.  As we all know, disasters such as this are specifically hard on fragile trans communities.

The good is the study which found (as we already knew) there is no link between transgender bathroom rights and sex crimes. From the Boston Globe:

"A first-of-its-kind study was released Wednesday and refuted the premise that the state’s transgender antidiscrimination law threatens public safety, finding no relation between public transgender bathroom access and crimes that occur in bathrooms. 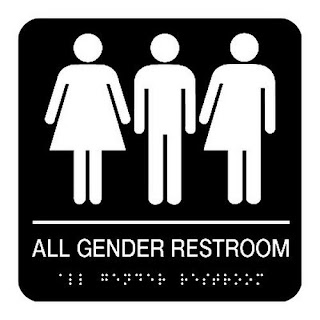 Researchers at the Williams Institute, a think tank focused on gender identity at the UCLA School of Law, examined restroom crime reports in Massachusetts cities of similar size and comparable demographics and found no increase in crime and no difference between cities that had adopted transgender policies and those that had not. The data was collected for a minimum of two years before a statewide antidiscrimination law took effect in 2016."

Perhaps the Catholic Church should have been included in the survey!

Thanks to Bobbie for the heads up!

Also, our illustrious non leader continues to recieive push back on his idea to ban transgender troops from the military. Recently a group of congress persons got together to send him a rebuttal on the idea.  Although, I am sure he has bigger fish to fry right now!

Finally, I briefly saw a promo on what looked like a series or show on a transgender marriage. All I think I know now it is on Monday, airing on NBC. I will let you know if I find out more.
at September 13, 2018