One side of myself through all my cross dressing closeted years wanted desperately to believe I was made of the "right stuff" for continuing to fight all the evil urges I had to be a girl. In fact though, all I was doing was tearing myself up. Would not wish it on my worst enemy.

On the other hand (as I mentioned a couple of posts ago) there were the occasional shows on television which had a male actor cross dressed as a woman. I remember distinctly hoping no one else would start complaining to change the channel and me trying to act like I didn't care.

Of course, many of us transgender women feel the same way and were raised close to a similar way. 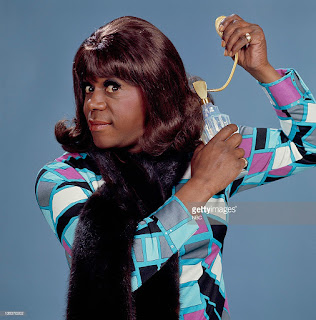 FABULOUSCONNIEDEESeptember 20, 2018 at 12:58 PM
"Those were my college days, when the Flip Wilson Show was on TV. I had gone into my "Great Suppression" in 1968, after a fairly regular closeted cross dressing life of six years. I was very aware of the term, transvestite, and sexual deviant, too. As was my sneaky way in those days, I took Psychology courses as a way to safely research my "condition" (which, of course, I had overcome with pure will power...push down the urge and live with the purge). Wilson's character, Geraldine, was of interest to me academically, and I was very attuned to what others were saying about the characterization.

I had one of the only TVs in my college dorm, so there were usually a few guys in my room watching the show with me. I studied their reactions and made mental notes of their communication - both verbal and nonverbal. My conclusion was that I was doing the right thing in suppressing my gender identity, as I would have surely suffered total humiliation had my secret been revealed. I did consider a ploy, whereby I would suggest that I cross dress for a skit for the all-dorms talent show. That may have been putting myself on a slippery slope, I thought, but the real reason I couldn't do it was that being a clown was not the way I felt about myself.

I remember that the skit we did do was a mock Tonight Show, and that I played a Frank Sinatra-type character, singing "My Way." What would have happened had I come out as Doris Day, singing "Que Sera, Sera"? Many years later, "whatever will be" finally turned out to be my way!

BTW, I rewrote the lyrics to "Que Sera, Sera" for a show I used to do called "Passing Fancy with The Fabulous Connie Dee." It goes like this:

When I was just a little boy,
I asked my mother, What will I be?
Will I be pretty, or just some bitch?
Here's what she said to me:

This is, of course, pure fantasy. My mother would never have said that!"
at September 21, 2018