Perhaps you have read or heard of Christine Hallquist. To refresh your memory, she won the Vermont primary, becoming the first transgender woman to win a major party nomination for a state governor.

Of course any story of how a trans person can accomplish such a feat is amazing, but here is a bit of Christine's:


In the fall of 2015, the thought of running for office was not even in the “realm of possibility” for Christine Hallquist, she said in an interview with The Washington Post.
Hallquist, then CEO of Vermont Electric Cooperative, was in the midst of 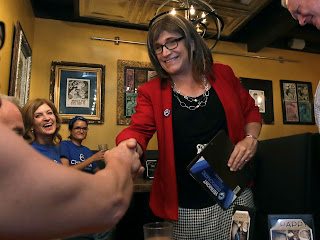 coming out professionally as a woman to her employees and worried they might not accept her. The company’s website still indicated that the firm was led by a man, Vermont alternative weekly Seven Days reported at the time. Her emails were still signed by her former name.

“Here I am, the transgender CEO of one of the most macho businesses,” Hallquist told Seven Days.
Just three years later, Hallquist could become the country’s first transgender governor.
Of course, there is so much more to her story.
Such as, Hallquist faces a steep path to the governor’s office. Republican Gov. Phil Scott remains popular in the state, even among Democrats. He has signaled a willingness to work with Democrats on issues such as gun control legislation, which he signed in April. He also has history on his side: No incumbent governor has been unseated in Vermont since 1962.