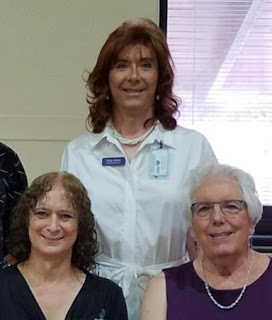 This previous Wednesday, when I went to the Cincinnati LGBT Veterans Pride Day, I had the opportunity to chat with the group organizer, Cathy. She is the one standing in the middle in the picture.

Somewhere in the conversation, the topic turned to one of the other members of the group we were supporting.

Since I was never sure how she (Cathy) identified herself, I simply quoted the other member and said Wendy had referred to Cathy as the "ultimate cross dresser." Meaning (I think), that she is a very accomplished cross dresser.

I was a little surprised (then again not) when Cathy paused slightly and said, she was thinking more and more about adopting the "gender fluid" label. Some days she feels like a girl and some she doesn't.

I thought it was a great answer and thought I might pass it along to some of you Cyrsti's Condo readers who may be struggling with your gender identities!