As you have probably heard by now, Daniela Vega made history this weekend at the Oscars:

The star of Oscar-nominated film Una Mujer Fantástica (A Fantastic Woman), Daniela Vega, made Academy Award history Sunday night, when she became the frist transgender actress to take to the stage as a presenter at the ceremony. The Chilean introduced Sufjan Steven’s performance of “Mystery of Love,” which features on the soundtrack of Call Me by Your Name. “I want to invite you to open your hearts and your feelings to feel the reality,” she told the audience. “To feel love. Can you feel it?”

From El Pais:
The triumphant moment could not have been further from how things were when, as a 14-year-old, her life split in two, and she began her transition from a man to a woman. Once in her new female body, Vega did not know what path to follow – acting or singing – nor whether the artistic world would accept her.

"You learn and grow from pain,” she told EL PAÍS in February, hours before A Fantastic Woman took the Best Film award at the Goyas, Spain’s answer to the Oscars. “Transgender people are marginalized. You suffer a lot in the transition. And this pain makes us strong, hard, and can even make us bad tempered,” she explained, while Juan de Dio Larraín, the co-producer of the film, brought her a beer. With the support of her family, Daniela broke with social convention and assumed her identity as a trans-woman. “I have a lot of hope in the future generations in Chile, [society] is opening a great deal. 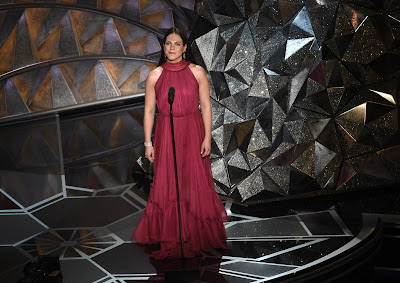