"Walgreens has announced it will change its bathroom policies after a transgenderwoman was discriminated against while trying to use the women’s facilities in Hollywood last year.


While on her way to LA Pride, Jessie Meehan stopped into a Walgreens store and asked an employee if she could use the bathroom. She said she was told she would have to use the men’s facilities because she “looked like a man.” 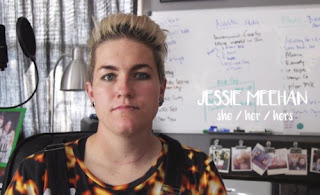 The ACLU of Southern California supported Meehan in her attempts to affect change, and it announced in a press release today that those efforts have been successful.
“Meehan ended up having to use a stall in the men’s room,” the statement recounts. “She was humiliated and upset. Afterward, she sought a change in the company’s policies.”
“Through her efforts, with the backing of the ACLU of Southern California, the Walgreens pharmacy chain with more than 8,000 stores nationwide adopted a policy to address bathroom discrimination,” it continues. “As part of a directive to employees, the company stated: ‘All individuals have a right to use restroom facilities that correspond to the individual’s gender identity.'”
This is of particular importance to me since Liz's son works at a Walgreens and a particuarly abrasive manager on occasion has referred to me as "he" on occasion. However, I have never had to use the restroom there.
You may recall in a former Cyrsti's Condo post , the same Walgreen's does have a trans man employee, complete with his preferred pronouns on his name tag. Plus, Walgreens as a company normally is ranked with very good to perfect LGBT ratings.
It proves once again, it only takes one to spoil the soup. There is more to this story. Go to the LGBTQ link above.
at February 06, 2018