From the Washington Blade, these are the sort of transgender stories I love to share!

"When Danica Roem takes the oath of office in Virginia’s statehouse on Jan. 10, the country will finally have an LGBT legislative caucus where the “T” isn’t simply aspirational. For her historic accomplishment, Roem deserves the acclaim and unmitigated respect of the entire LGBT community. Not only did she demonstrate great courage in running as an openly trans candidate against a 13-term incumbent, but in defeating Robert Marshall she banished from public office a man who had brazenly styled himself “chief homophobe” of the Old Dominion.


From across the Potomac, we Marylanders who have long hoped to put the “T” in our own caucus, will find the day to be bittersweet as well. On Jan. 10, the Maryland General Assembly will commence yet another session without a trans lawmaker. 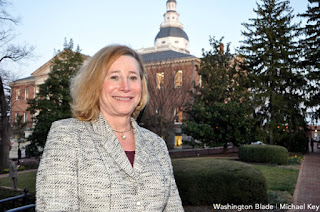 If we choose to do so, however, we can make it the last.
At the end of session, Sen. Rich Madaleno – in his pursuit of the governorship – will be vacating the Senate seat representing Montgomery County’s 18th Legislative District. Longtime trans activist and local political operative, Dr. Dana Beyer, has announced that she will run to succeed him."