A long-time advocate for the transgender community, Laverne Cox made history as the first transgender actress to play a transgender series regular on a broadcast television show when the legal drama Doubt premiered on CBS Thursday night. 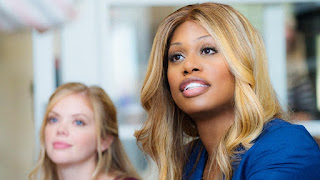 While I was thrilled to see Laverne in the role, I wasn't so sure I was pleased when she explained to a client that yes, she used to be a man, but was now a woman. Somehow I had hoped the writers would let her play the character without ever mentioning she was transgender at all.


However, Tony Phelan and Joan Rater, Grey's Anatomy alums and the husband-and-wife creators of Doubt, wrote the part of Cameron with Cox in mind.  But they knew she was on Orange, so they assumed that she was unavailable, and were ready to conduct a nationwide talent search to find the person who was going to play Cam.. But Laverne Cox jumped at the idea to play the role.
Plus a deeper trans connection with the show comes from the producers very own transgender son, an actor who had gotten a lot of press at the time for playing the recurring role of Cole, a transgender teen living in a group home on the ABC Family series The Fosters.
Some day perhaps, we all will be recognized as people...not trans people. But until the day, Doubt is a great start.
at February 16, 2017