And thanks to all of you who have pointed out it's issue on gender which features a nine year old transgender girl on the cover. 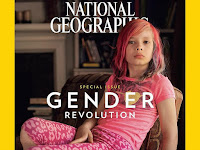 The magazine has come along way and we need it as a respected counter balance to Brucelynn Jenner among others.

I think those of us of a "more mature" age still don't understand all the positive ramifications of a younger generation who see less gender in their world!

Regardless of what happens in the years ahead in Washington, some basics will never change such as when I went to Liz's company party the other night. Following the normal looks I get, everyone settled down and I had a great time and even met the wife of a fellow fledgling transgender person who is trying to find her way.

My only problems came when I was on the road all day and forgot to pack my backup makeup in my purse. I thought I could have presented better but then I always think that.

I would also like to thank Stana from Femulate who was kind enough to plug my book today. Stilettos on Thin Ice made it up to the top 6% of non fiction books on Amazon last week. And yes, book number two is still in the works.
at January 19, 2017