On Tuesday afternoon,  Kristin Beck, who is transgender and a retired Navy SEAL, was bound for Kansas City to give a speech to federal employees about gender sensitivity. It's what she does, since she stopped going by her birth name, Christopher Beck, wrote a book about her life as a member of SEAL Team 6 and was featured in the CNN series, "Lady Valor."
Beck told CNN she arrived at Reagan National Airport with enough time to spare, but not too much. Beck entered the security checkpoint, put her bags on the conveyor belt and stepped into the body scanner, as she's done countless times before.
When flagged for secondary screening, she took it in stride. She said she waited for one of two Transportation Security Administration agents -- a man and a woman -- to step forward and pat her down. Instead, they turned their backs to her and started whispering.
But to Beck, it was clear what was happening. Despite her makeup, long hair and low-cut blouse, the agents thought she was a man. It wouldn't be the first time since she began publicly living as a woman.
But it still was humiliating, Beck said. It never gets easier.
"I'm a female," she said she told them. "It's no big deal."
Apparently, it was enough to prompt the agents to call their supervisor, she said. When he arrived, the supervisor directed the male agent to pat "him" down in front of the security line, as everyone waited.
"These are my real boobs, he's not going to pat me down," she recalls telling agents. 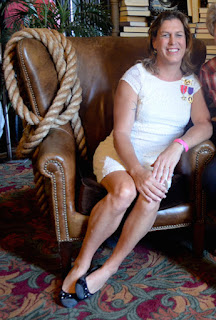 "This is wrong. I'm a female, it says female on my Maryland driver's license. This is the real me."
According to Beck, the supervisor responded, "Then somebody pat him down."
The female agent stepped forward and did the pat-down, Beck says. After that, Beck went on her way, holding back tears. She pulled out her phone and recounted the experience in a Facebook post."
Ironically, Kristin wrote that this was probably an isolated incident but unfortunately not to certain transgender passengers who travel by air frequently. In fact a trans woman here in Cincinnati was given fits often when she flew from here to LAX Airport.
Please go here to read more of Kristin's comments..
Email Post
Labels: Kristin Beck trans trans woman transgender transgender veteran