"Struttin" With The Trans Peeps

From Variety:
"“They’re the best people in the world,” Whoopi Goldberg says about the cast of “Strut,” her new Oxygen show that follows a group of models signed to Slay Model Management, an exclusively transgender modeling agency.

The first reality modeling show to focus solely on transgender artists, “Strut,” which Goldberg executive produces with her producing partner Tom Leonardis, is breaking ground in the unscripted space and marks the latest series in the recent wave of trans-centric programming. 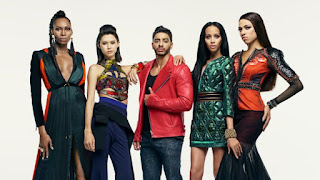 “Our programming commitment is to showcase people on journeys to find their truth — and be their truth. This is a generation who most definitely aren’t going to be confined by yesterday’s social mores and rules,” Rod Aissa, executive vice president of original programming and development at Oxygen, tells Variety."
I have only seen a partial show, but to me it takes a clear true shot at the overly dramatic world of transgender women. Mixed in with just a small dose of reality. The show I saw had quite the scene with the trans guy coming out to his mother.
Even still, I lean towards calling it the "Real Trans Models of L.A." to go with all the Real Housewives shows. Not must see trans programming but entertaining and definitely glamorous!
To see more and if you can view it on Oxygen go here.
at September 21, 2016