If you are not familiar, there is a third Republican presidential candidate who has been lost in the circus dust from the two remaining candidates and he is Ohio's Governor John Kasich. The other two , Trump and Cruz have been able to cloud the issues so much that Kasich's flaws just kind of slip through the huge cracks. Like this one: 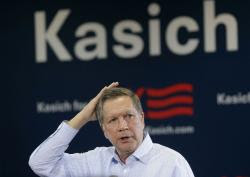 During a recent campaign stop in Troy, New York, GOP presidential hopeful John Kasich was asked about Leelah Alcorn, the trans teen from Ohio who made headlines after she took her own life by walking into traffic after her family refused to accept her and wanted her to undergo conversion therapy.
Though the Ohio governor was "not familiar" with Alcon's tragic story, he took the moment to talk about same-sex marriage, LGBT rights and the anti-LGBT "religious freedom" measures popping up in a number of states, ABC News reports.
"This is a very tough issue for people, and let me tell you my view of it: First of all, I'm not familiar with that case," Kasich told a crowd of supporters. "But I've been watching what's happening in North Carolina what happened in Indiana - I'm not watching it closely - but what happened in Mississippi. We have all this legislation that people are proposing... I don't want any discrimination against anybody. I'm not in favor of discrimination, period, end of story."
"Secondly, the Supreme Court ruled in favor of gay marriage," he continued."I'm a traditional marriage guy, but the court ruled. I'm allowing the court ruling to stand. I'm not looking for some constitutional amendment - it's done."

Actually, I think Kasich is more of the consummate politician and he knows how a North Carolina law would fly in Ohio, into the nearest wall. However, for him to claim he knew nothing about Leelah Alcorn's tragic suicide about 100 miles south of him on I-71 is tragic as well.

Maybe he was already out of the state looking for money?