Ironically I ran across two pictures in one day which illustrated my "blond days." 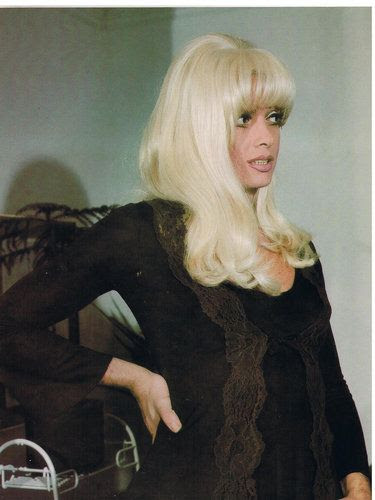 The first is a picture of a person in a wig very reminiscent of one of my first "real wigs."  For some reason, one of the beauty parlors I used to walk by all the time had a wig in the window (between all the ultra short conservative wigs) which looked just like the one on the left.

I was in love but could not figure how I could ever build up the courage or the funds to buy it.  Through a complex series of happenings finally I was able to convince my then fiance to buy it and then I "appropriated" it.  All of this process occurred in the early 1970's when I was still in college and looking dead ahead at being drafted into the Army.

I called the process years later a common one for a vast majority of cross dressers I knew.  Wasn't being the blond "bombshell" everyone's ideal?  Can't speak for "everyone", but it was mine. I ended up keeping the wig much longer than my fiance who dived on me when I went into the military.  (True Love?)

Years later, in the picture you see to the right was blond wig I literally wore out as I was solidifying myself as a feminine person. (Before, I would spend a week as a blond, the next as a redhead, etc.)

Ironically, deep down, I knew that my hair color (blond or not) should be tied in to my complexion not fantasy. Especially, if I was to be successful in my quest to live in a feminine world.

Now of course, since I have "inherited" all of my real hair, I'm able to play in the "real hair" world of women.  Essentially, dark hair in the winter and lighter in the summer. Through the miracle of hair colors I'm able to go back to my roots (and color them). My natural air color before the gray sat in was nearly black but I have a heritage of red heads from my Mom's side of the family.

Somewhere admist all of that though the old blond love affair still exists.