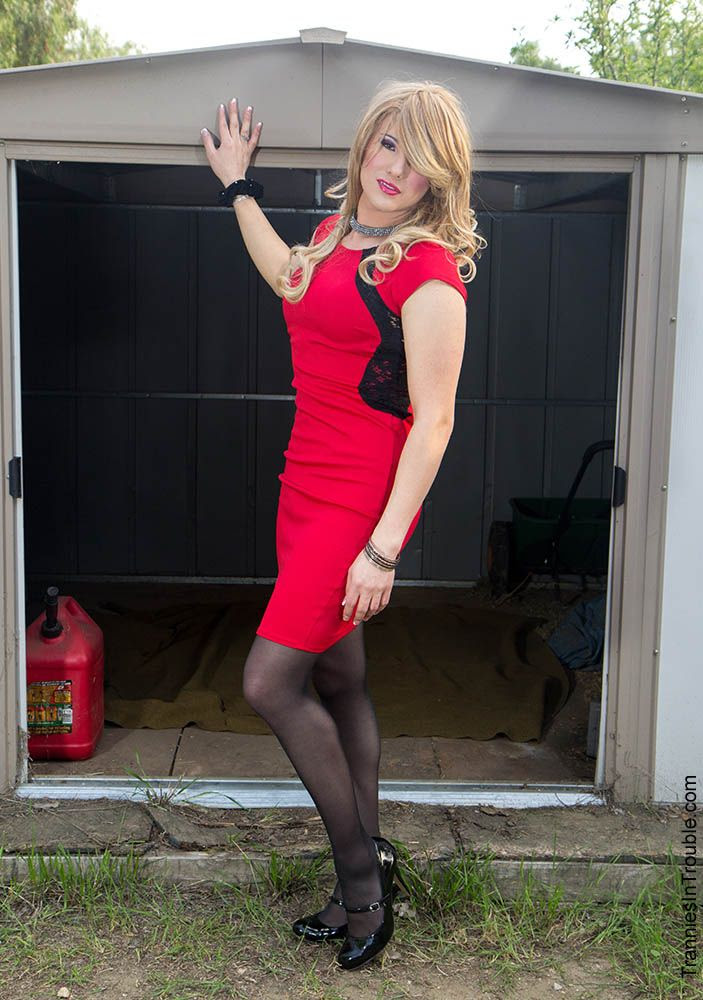 The same thing has happened to me! Let it go, you're still you! And you're looking good! Thanks for the pic, Cyrsti.

Number one, I'm sorry I didn't make it clear the cross dresser in the picture is not me but the situation has happened to me-kind of. ( If anyone knows who she is, please pass the compliment! -And thanks for being so incredibly protective of me!")

While we are backtracking here in Cyrsti's Condo, let me explain what "purging" has always meant to me:

It's the act of throwing away all (or a portion of) your "stash" of feminine articles  When I saw this un named person, I thought immediately someone had found her "stash" hidden away with the lawn mower.

I'm sure like me, all of you have creative stories of where you attempted to hide your stash.  When I was a kid, I used an old box above the garage which was marked as books and even kept a water proof dress, mirror and makeup hidden back in the woods beside our house.

Later in life, I would keep a certain amount of items in a closet space my semi approving wife knew about and then had other stashes hidden here and there.  For the most part the scheme worked well, my problem was flat out getting caught cross dressed in the world-where by mutual agreement I shouldn't have been.

The most embarrassing instance of having my stash discovered and thrown back in my face came just before I had to go into the Army.

I was living in an apartment with two other guys in a medium sized college town in Ohio.  Truly, I got a little careless with how I was hiding my wig, clothes and shoes, and was "discovered."  The worst part about it was, I didn't know right away.  My two roommates were still in college and went home for Christmas break.  I had graduated and was waiting for my due date at Ft. Knox.  A few days after they had left, another guy who had kind of just "hung out" around there happened to stop by.

Looking back, he had to have known about the discovery because he casually turned the conversation around to cross dressing.  I figured what the hell, in a month I would be in the hills of Kentucky running and doing all sorts of other fun Army stuff.  So I told him what he obviously already knew, I was a transvestite or cross dresser and I would show him.

Secretly, I was fantasizing he would find me amazingly beautiful and ask me to go out with him.  What I really found was someone had stolen most everything I had.  So that was that.  When everyone got back from Christmas, of course they all viewed me a little different and even blamed their girlfriends for stealing my things.  I just them to go to hell, where I was going I couldn't wear them anyhow.

I made sure I let them know that even though their girlfriends enjoyed the supreme female privilege of not being drafted- I hope the rest of them would soon enjoy the military too!.
at August 16, 2014