If my old addled noggin has served me correct, in the past here in Cyrsti's Condo, I mentioned the possibility of putting together a persona called Madam LaNoe!" My initial idea (which got better and better as I had more and more adult beverages)  was, the "Madam" would be an "intermission" performer at drag shows. 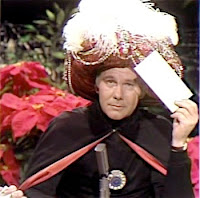 She would be a harmless blend of Johnny Carson's "Carnac" (picture provided) - with a pinch of voodoo tossed in along with fortune telling and snake oil sales. Ironically, in another life I did a take off on Carnac at a couple functions-complete with hat.

Don't panic, my "card reading" would be from a regular deck of cards and my "voodoo" doll would be a stuffed bunny rabbit in a basket.

So, my partner Liz is a great seamstress and knows her way around a little make up and is creative as hell to boot.

So two nights ago, she is up at five in the morning tracing ideas for "The Madam"  She wants to "roll her out" at the big "Highball" Halloween party in Columbus, Ohio this year. AND! She won't let me see any of her ideas and get this:  She simply said "I will blow you like you have never been blown before!"  Well, even I had no comeback for that!

I do know this, the image on the right is similar to the makeup she wants to do on me and I have this giant black drag wig.  Past that, all I know is, "The Madam" will have long flowing skirts and old combat boots and possibly will be outfitted with her own "business cards."

The only thing I can tell you is, Halloween is looking a whole lot more interesting this year!!!!