Any of you who have spent anytime around Cyrsti's Condo know I'm a transgender veteran and a huge fan of trans vet Autumn Sandeen.  Autumn is always modest enough to play down her role as a transgender veteran trail blazer within the VA. But she IS and uniquely qualified to speak on navigating the VA system. Often very different than "civilian health care".

Recently she wrote a post called Transgressive Health Care for the San Diego LGBT Weekly, centering of course on the VA and trans vets. Here's an excerpt: 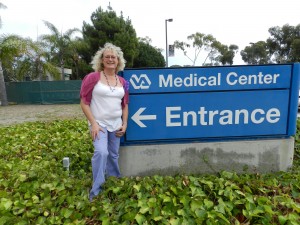 "Even though I’m a kind and joy-filled person, I’m always prepared to deal with inappropriate comments or behavior from the government-employed health care services workers. I’m always ready to ask why a medical doctor, nurse or technician’s bigotry is getting in the way of treating a veteran with respect to their service. Yet, I’ve never had even one treat me with anything but the purest of professionalism at the Veterans Health Care Administration (VHA) or at the Navy Medical Center, and I’ve never had to challenge anyone on their bigoted speech or behavior.
Here in San Diego, I just haven’t experienced that kind of inappropriate behavior. That I’ve never had difficulties with those who provide health care services to veterans, that I’ve never had anything but positive experiences with those health care professionals, actually makes me a bit proud of those VHA and of those Navy Medical Center, San Diego employees. Here in our city, these folk have all served me as a retired and disabled service member with honor, respect and professionalism."

I agree with Autumn's description of the system. My VA center (Dayton, Ohio) is probably much smaller in scope than some. Because of that my only problems have come from Dayton not having a full time endocrinologist in the center.  I had to get permission to go outside the system.  My dealings with the people have been remarkable. I do know that all you trans vets do not have the same story.

Autumn's latest post was very important to me as it describes her experiences with a mammogram. You can read it by following the link above. A mammogram needs to be in my future because my maternal grandmother died from breast cancer.

Not that I'm surprised but when she went in for the mammogram, the questions such as "when was your last period" or " how many times have you been pregnant" , had no other options than a number.  By the time she left though Autumn had voiced her concerns about not including options for transgender or intersex persons and she was getting the form changed.

Indeed I probably will face the same issues with the intake form when I go for a mammogram and I will make the same suggestions.

In my own small way, my goal is to try to change the system for the future.  From the way it's looking, there could be many more trans vets coming soon!