Was it Halloween or... 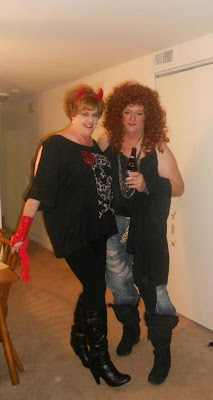 Or a fun night with friends in a neighborhood tavern in Cincinnati?
Actually both as I ended up with four genetic beer drinking jello shot slugging women. Times were rough? Not so much! As you can see in the pictures, I wasn't drinking. Haha.
I would estimate only about a third of the customers were in costume. I told the girls before we got there I was a little apprehensive of walking into a red neck bar, being the only ones in costume and being "underdressed" in huge red hair and boots.

Well, I was right about the no other costumes to begin with. Just one other person- but it was early and the tavern was neighborhood not redneck and none of us got much attention.
Most of the patrons were engrossed in a high school playoff football game on the televisions between two Cincinnati teams-forget Alabama/LSU.

As the night wore on, the bottom picture shows what happened when all of the sudden I experienced wig slippage.  (Haven't worn it much!) .Interestingly enough though,  a newcomer to the table at the same time asked me if the hair was mine. A couple of the other women assured her it was- until I had to adjust it!

Overall, it was one of those evenings that makes you wish Halloween lasted just a little bit longer! 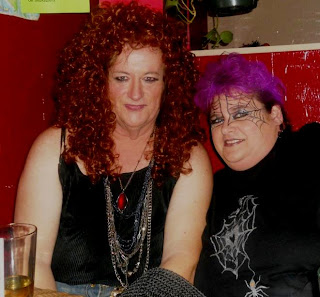