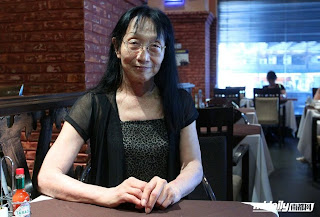 From the Shanghaiist comes this story called
"Man enough to be a woman". Here's an excerpt:

"Qian Jinfan (钱今凡), a 84-year-old calligrapher, art critic and retired government official based in Foshan, has become China's oldest openly transgender individual, after outing herself in an an exclusive interview with the Southern Metropolitan Daily, in her bid to promote understanding of transgenders in China."

Although I know many  in our community scorn so called "late bloomers" such as Qian (and I) it's a tribute to transgender individuals of any age to finally be able to persue their gender quest and it's a bigger tribute to those who go public with their lives!
Email Post
Labels: China Qian Jinfan transgender transsexual