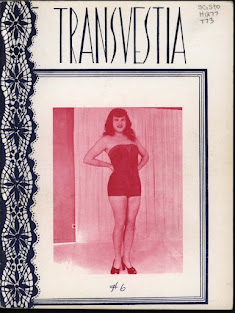 I may be biased but I can't think of anything worse than growing up with a massive case of gender dysphoria. Of course the problem was compounded by growing up in the pre-internet, pre social media era. Unless you were fortunate enough to discover and subscribe to Virginia Princes' Transvestia magazine, you were basically cut off from the rest of the gender dysphoric world. In other words, the dark ages of locating any gender support at all. Dark times indeed for those of us stuck in our closets wondering if we were the only one anywhere who wanted to express themselves as the other binary gender.

Through it all, I felt I wouldn't wish my gender dysphoric impulses on anyone. There were so many times in my life I wished I could go back to being a man full time. After all I had spent so much time and effort to survive as something I wasn't, it seemed so unfair I couldn't enjoy any of the fun aspects of being a man. As time went on, the more time I tried existing as a man I was suffering from a severe case of impostor syndrome. The more time I spent discovering my authentic feminine self, the more natural and detached I felt from the masculine self I had tried so hard to become a part of. Try as I might I just couldn't feel natural around a group of men doing stereotypical men things.

I tried along the way to live with a foot in each of the binary genders or how I could exist and live equal time as a man and a woman. Naturally it didn't work as I encountered all sorts of problems remembering which gender I was operating as. Plus another problem arose when I began to feel much more natural as a woman, which led to me having an extra amount of resentment towards having to try to be a man at all. To make a long story short the whole ugly process led me to attempt a self harm attempt (suicide). It obviously wasn't successful and ultimately forced me down the path of least resistance...a path to being a full time transgender woman.

Even though I eventually reached my feminine dream I still have to live with the scars of growing up with gender dysphoria. I still wake up every morning seeking the reassurance of having my own long hair and breasts. Every little bit helps to remind me I am finally living my dream. Even still, I still wonder what it would have been like to grow up as a guy who didn't want to become a woman.

It will be a secret I won't know until I make the final transition to the other side. Maybe then I will find out why I was chosen to learn how both genders live and exist. Maybe I was blessed or cursed.