Lady and the Dale 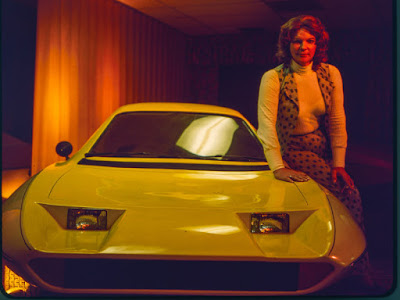 "The Lady and the Dale, a new HBO documentary miniseries co-directed by Nick Cammilleri and Zackary Drucker, has been promoted by the network with most of its secrets held in check. Tune in to this nonfiction biography series, the promos suggest, and learn the tale of a female automobile executive who took on the Detroit automakers and tried to market a gas-efficient car in the 1970s, at the height of the oil crisis."

"The Lady and the Dale has the flavor and momentum of Catch Me if You Can, that Steven Spielberg movie with Tom Hanks on the trail of a teenage con man played by Leonardo DiCaprio. But before the first episode is over, Jerry comes out as a trans woman and changes her name to Elizabeth Carmichael. The kids are raised to call Liz mom and the series goes on from there, with Liz starting the 20th Century Motor Company and introducing the Dale.

Eventually, Liz is arrested for fraud, and goes on trial to defend the lack of production of the Dale. But in the '70s, with transgender issues so relatively unfamiliar and widely misunderstood, she goes on trial in other ways, too — especially in the media."