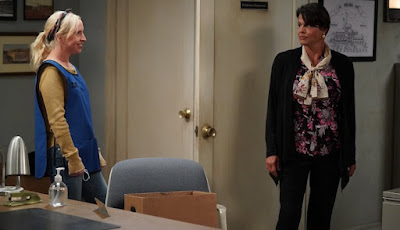 From the Advocate. Com:

"A Hollywood veteran of nearly two decades, Alexandra Billings (above/right) is currently guest-starring on a multi-episode arc of the hit ABC sitcom The Conners as Robin, a transgender woman who is a supervisor in the factory where Darlene and Becky work.

For The Connors, it’s another sign that the reboot of classic sitcom Roseanne is continuing it’s trend of reflecting current America on the show, and for Billings, it’s another extraordinary role in a storied and successful career that’s included stops on Grey’s Anatomy, How to Get Away With Murder, Never Have I Ever, Goliath, and Transparent. More recently, she was playing Madame Morrible on Broadway in the iconic musical Wicked."