So...You Want to be Pregnant?

Along the path of my transgender journey, being pregnant in reality or by using aids to appear with child never really appealed to me but I know it certainly does to others. Plus, I can think of no other way to "pass" as a woman than to be pregnant. Although, if you happen to see the same people more than once, it would difficult explaining what exactly happened with your pregnancy.

Moving all of the intro aside, I read a delightful experience this morning from sister blogger Mandy Sherman. The post's title is "It's a Girl" and here is a short excerpt:

"Since not much has been going on lately, I’ve been thinking back about my fun makeover a number of years ago, it reminded me of a special adventure, which took place courtesy of my supportive seamstress from the other side of the bay (who had been altering my clothes for a long time). I asked whether she could come up with a pretty “just-above-the-knee” lightweight summer dress that fit me properly. She thought for a few seconds, smiled devilishly (that should have been my first clue), and said “Yes indeed, sweetie…and it’ll be one which really flatters your figure.”

Easy request. Sounds simple, right? Ummm…Perhaps not so much…

It took a while for everything to come together (think in terms of months). When she had everything ready, she made sure I would be wearing needed underthings (a second clue?), and a date was set for my unveiling.  On the appointed day (with wife out west, visiting her sister), she ushered me into her dressing room. Then she handed me a very pretty blue polka-dot, lace-trimmed, sleeveless short dress, which I casually mentioned looked much too big for me.  She gave me that silly grin (third clue??), said “you know me better than that,” left the room, and and came back with a large package. “Congratulations, sweetie. You’re now 8 months pregnant…and it’s a girl, confirmed by an ultrasound two months ago.”  I opened it and OMG – it contained a big and very realistic silicone pregnancy belly.

I decided on the spur of the moment that “In for a penny, in for a pound.” It’s a new experience. Why not try it? She helped me fasten it on, and “now let’s get you into your pretty new dress.”  I had wondered about the measurements she took during prior visits – but as it turned out, instead of sewing it herself, she simply altered an abandoned maternity dress to fit me, to keep the cost down. Estimating what my size would be with the belly in place was her challenge, and she added an inch of pretty lace around the hem to give the illusion of more length…which could be removed quickly if necessary to shorten it. The result was amazing. It fit perfectly, and she described how she did it, while I stared at the pregnant girl (me) in the mirror. " 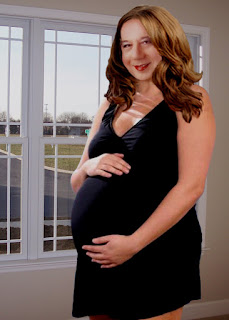 There is more to this story if you follow the link above!