From Philadelphia Today along with a heads up from Bobbie: 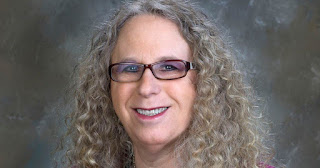 Every time Pennsylvania Health Secretary Rachel Levine (above) appears on television with Governor Tom Wolf to talk about coronavirus in the state, Philly Mag gets a surge of internet traffic to articles we published more than five years ago. Those articles focused on the fact that Levine is the highest-ranking transgender official in Pennsylvania and one of a small number of transgender people serving in elected or appointed offices nationwide.
As Pennsylvania Health Secretary, Levine oversees the 1,300-employee Pennsylvania Department of Health and its battle against the coronavirus in Pennsylvania. In that role, she reports directly to Pennsylvania Governor Tom Wolf. She is also a professor of pediatrics and psychiatry at Penn State College of Medicine.
Levine previously told the Washington Post that being a person who is transgender has not been an issue, “with very few exceptions.” Levine has been open about her personal life. She has an old photo hanging in her office showing her when she was a married man named Richard, standing with her family. Levine is now divorced, and her children are grown.
There is more to her story of course. To read it, go here.
Email Post
Labels: transgender