Pride Month is Over

It has been a very quiet month this year concerning Pride activities. In an usual year there are at least six "celebrations" in the Cincinnati-Dayton Ohio metro area. Due to the virus concerns this year, all were cancelled. Then of course, there are the continuing Black Lives Matter marches to consider.
Regardless of the lack of parades and parties, it should be time to stop and consider what Pride stands for anyhow. Many forget the original "Stonewall" riots a half century ago which started the whole LGBTQ movement and typically many of the gay and lesbian members of the community forget it was transgender women of color who were out front spearheading the movement. Once again, the transgender members were moved to the back of the line.
Ironically, many trans people don't seem to care. My theory is it is because many gay men and garish drag queens have essentially "hi-jacked" the experience. I felt if I saw one more drag queen leading a Pride parade, I was going to run and hide. After all, what did it mean to me.
Then things began to change (around here at least). Slowly but surely, I began to see more and more transgender people at Pride and even a trans woman as a parade leader a couple years ago. All of a sudden the whole process meant more to me. I even think my new board membership on a primarily gay and lesbian board was because they were seeking more transgender input.
The recent supreme court decision backing trans health care is yet another reason to be proud of who we are and proud of the legal organizations who support us.
Even if you are still in the closet, it is time for you to join the rest of us and feel good about who we are.
Pride month is over but the feelings don't have to be. 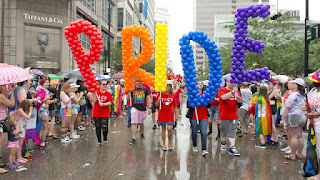