From the ITV News:
"A transgender couple have said they "could not be happier or more grateful" to announce the birth of their daughter.

Cardiff-born mother Hannah Graf, who was the highest-ranking transgender officer in the British army, came out as a transgender woman in 2013.

Jake Graf, who is a television director and actor, transitioned in 2008. 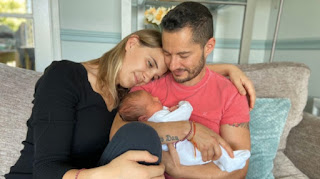 The couple announced in December they were expecting a baby.

Jake said that the couple's "amazing surrogate" gave birth to their daughter on Tuesday morning."