Sunday, when we went to pick out Liz a new outfit for her Christmas parties, I experienced a feeling I hadn't went through for awhile...Trans-PTSD.

If you don't know what PTSD means, here is a short definition from the "National Institute of Mental Health" :

"PTSD is a disorder that develops in some people who have experienced a shocking, scary, or dangerous event.
It is natural to feel afraid during and after a traumatic situation. Fear triggers many split-second changes in the body to help defend against danger or to avoid it. This “fight-or-flight” response is a typical reaction meant to protect a person from harm. Nearly everyone will experience a range of reactions after trauma, yet most people recover from initial symptoms naturally. Those who continue to experience problems can be diagnosed with PTSD." 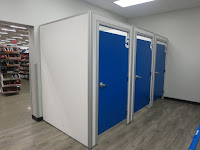 It's been awhile since I have experienced a short time like I did Sunday. To start with, Liz picked out five dresses to try on. As she was going back to the women's dressing room, I was prepared to stay out side in the store until she (Liz) said, get back there with her to tell her how she looked.

Without hesitation I followed her back without even a look from the girl monitoring the rooms. I felt OK until I heard heavy footsteps coming into the stall beside us and all of the sudden, I was expecting a knock on our door asking what we were doing in there. For an instance all the ancient memories of rest rooms past came flooding in on me. To the point I could barely take a breath! After a moment though, my panic subsided and I felt so relieved (as well as a little silly).

I just don't know after all these years without a problem, I would still feel this way. Perhaps I always will.