All too quickly, the Cincinnati Pride Week has come and gone.

Yesterday, my day at Pride started around 6 AM and ended well after midnight. Of all that time, approximately 11 to 9 PM was centered around our Witches Ball Booth at Pride itself. 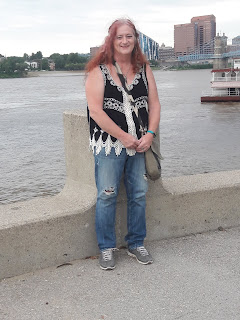 This picture was taken just behind our tent along the Ohio River.

The main thing I noted at this years event was the sheer numbers of transgender women. Seemingly just the opposite of years ago, when all you saw were garish drag queens and the occasional cross dresser teetering around uncomfortably on impossibly high heels. At this pride the "T" in LGBTQ was very visible.

Also a big surprise happened to me when a fairly new acquaintance of mine had an extremely long chat with me about her new experience with her transgender daughter. In fact, her daughter wore a dress for the first time ever in public. She was very accepting!

Weather wise, we lucked into a very nice day. It did rain early during the parade but cleared off with highs near 80. Unfortunately, I did get a little too much sun, which my doctors tell me not to do.

So, Pride again was an all inclusive very positive experience which provided me with a very positive view of the transgender future.