A small group of friends I have, every month has a dinner get together called a "meet-up." 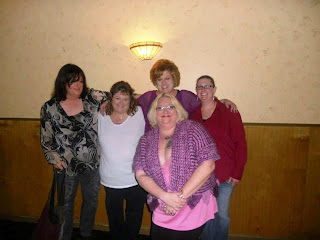 Monday night, this month's meet-up was at a local Mexican restaurant. Out of seven people who said they were going to come, only three showed up. Including me. The other two were cis women I have known for awhile. To them I am just me and not transgender.

The dinner went along well with everyone sharing small talk about family and spouses. I didn't think much of it until I was on my way home, how nice it was.  Years ago, I considered a "girls night out" to be a rite of passage into a feminine life and now I was taking it for granted.

The picture is actually taken years ago at my first "girls night out." During it, the woman on the far right with the burgundy top never did seem to accept me being there. As I said, I have known the women I ate with for several years, so I did not have any problem with anything like that. Even the waiter was liberal with his use of the "lady" word. I have had problems with that in the past in a few Mexican restaurants.

Time flies when you are having fun!