"In January, the Summit County Sheriff's Office operations commander and SWAT team coordinator, Lesley Mumford, was called into Sheriff Jaime FitzSimons' office for a sit-down. Undersheriff Joel Cochran was there, too, and it seemed like this was no ordinary meeting.
"I was quickly trying to recall anything that I might have done to get me in trouble," Mumford said. "I was at a loss, but it seemed like a very serious conversation was about to take place." 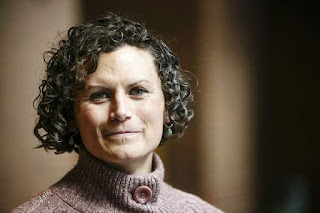 The pall was quickly lifted when FitzSimons told Mumford she had been accepted into the FBI National Academy, an elite, 10-week training course for law enforcement in Quantico, Virginia.

Mumford is one of roughly 200 law enforcement agents from across the country selected for the academy, a rigorous blend of classroom work and physical training at the storied FBI campus and the bank of the Potomac. Candidates are chosen every year through an extremely selective nomination and invitation process.
Mumford's selection isn't just an honor for her, though. It's also a groundbreaking moment for the FBI and law enforcement generally, as she will be the first transgender woman to ever attend the academy in its 83-year history.
"I think it's a pretty amazing thing, a historical thing," Mumford said. "It makes me feel that society is changing, it makes me feel that as individuals we do have the ability to change and influence the world around us."
For more, go here.
at March 31, 2018